Intralogistics is a segment that has seen a rapid development in recent years. The ongoing industrial automation has created completely new opportunities, with warehouses that have less and less need for human presence.
– A modern warehouse for typical e-commerce goods such as clothing, consumer electronics, medicine and more is running around the clock, every day of the year, says Sebastian Weber, CTO of myFC.

Developments in inventory management coincide with several other megatrends. One of them is the increasing industrial automation – an enabler for warehouse logistics that can be operated efficiently, competitively, and cost-effectively, around the clock without interruption.This in turn has created potentials for online commerce, which has grown rapidly over the past decade. Not least during the pandemic years 2020 and 2021, when the spread of infection, and restrictions, made it more difficult to visit physical stores. In online commerce, the speed of handling has accelerated and today a very fast turnover from order to delivery to the customer is required. There, automated warehouses with automated trucks and robots are something of a prerequisite for being able to meet the customer's expectations of fast deliveries and at the same time keeping costs down. 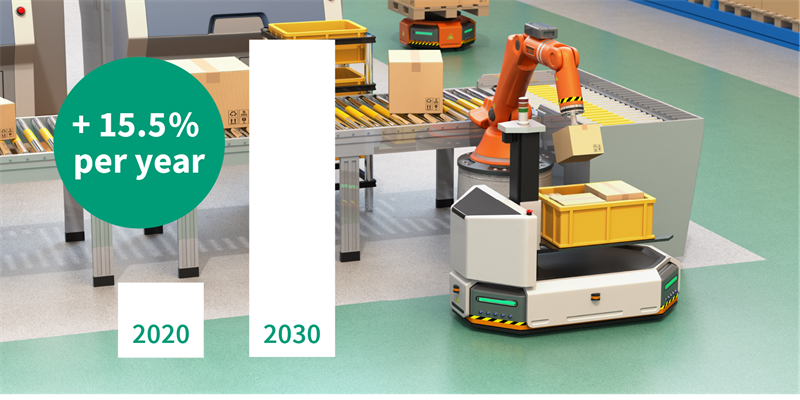 Rapid development. According to the site Robotics and Automation News, which refers to the market analysis company FactMR.com, the intralogistics market is expected to grow annually by 15.5 percent between 2020 and 2030.

Enables insourcing
All this also gives rise to another change in the present, where automation creates opportunities for companies to bring production home from low-wage countries.
The pandemic has also had an impact in that perspective. When cargo ships from Asia stopped arriving to European ports in the spring of 2020, it created an acute shortage of components that caused factories to close down. That sparked a debate about the need of having production geographically closer.
The incident with the container ship M/V Ever Given, which ran aground on the Suez Canal in March 2021, and for a week blocked all traffic, also pointed to the weakness with overly decentralized supply chains. The incident had major consequences since loads corresponding to up to 12 percent of world trade pass through the canal every day.
With all the desired clarity, the vulnerability of a global purchasing and logistics chain has been illustrated. It has become expensive to buy cheap, which opens up for local production in the EU. Which, however, also places high demands on efficiency to keep costs down.

Cost effective. Since storage robots with only batteries have to stand still and charge for a relatively long time, a surplus of robots is required. That excess can be reduced when the batteries are combined with micro fuel cells.

Long time for charging
Intralogistics is thus something of a cornerstone for major market changes. But a large part of the automatic handling in warehouses that is running around the clock – where machines do most of the work – is done by different types of connected and programmed warehouse robots, such as AGVs and AMRs. The self-driving trucks are powered by batteries, which means that they stand still and charge about ten percent of the hours of the day. Therefore, a surplus of trucks of about ten percent is needed for the handling to be able to continue uninterrupted. An excess of space is also required to accommodate both the extra number of trucks and the stations required to recharge them.
In that context, a technology where batteries or other accumulators – for example larger capacitors – combined with the green technology of fuel cells would have decisive advantages.
The fuel cells' hydrogen tank fills up very quickly – in less than a minute – which gives the vehicles an uptime of 99.5 percent. The supply of hydrogen is also generally good – although the lack of infrastructure for refuelling fuel cell cars can give the opposite idea.
The gas is also easy to store locally and has the advantage of not emitting any fossil gases at all. The only waste product is clean water.
It is also relatively easy to build up your own infrastructure for hydrogen production at your facility. A solution that, in combination with energy sources such as solar cells, wind power or hydropower, also supplies both a sustainable alternative and a potential solution to the challenges an increasingly electricity-dependent society addresses when it comes to how electric power can be delivered longer distances without having energy losses.
A local hydrogen production that is powered by solar cells on the roof, and which uses rainwater as the main raw material, is an efficient way to store the energy produced during a sunny summer season for use during the darker months of the year. In addition, if you have your own electricity production you will also gain independence from fluctuating electricity prices. That increases profitability and competitiveness and strengthens the company's sustainability accomplishments.
On-site electricity production is also a cost-effective way of dealing with the limitations of today's power grids, where the infrastructure is not dimensioned for the accelerating power demand that arises as electrification in society increases. An expansion of the power grids is – in contrast to the establishment of local production units – very costly.

Increased uptime. A drive package with both fuel cells and batteries significantly increases the operating time.

Formability is a game changer
The Swedish fuel cell company myFC has a patented technology that differs from the competition. The most common on the market are so-called stacked fuel cells, which are difficult to shape and adapt to specific design solutions. Stacked fuel cells are square and require significantly more volume than myFC's malleable micro fuel cells that can be made as small as a credit card, and who also can be shaped almost any way.myFC has focused on a lower power range, from 1 watt up to 3kW, where their solution has its most significant advantages compared to stacked cells.
The company has a B2B strategy where they have identified self-driving and connected, autonomous, trucks as an area where their malleable, lightweight, and easily scalable micro fuel cells would provide great benefits. Another identified area is softmobility – for example taxi pods, scooters, electric bicycles and more.
The strategy has borne fruit. In the spring of 2021, the company started a collaboration with one of the global players in softmobility and during the summer, a collaboration with a well-known European OEM was also announced.
– I see intralogistics as an industry where our technology can become something of a game changer, both in terms of sustainability and economics, says Sebastian Weber.