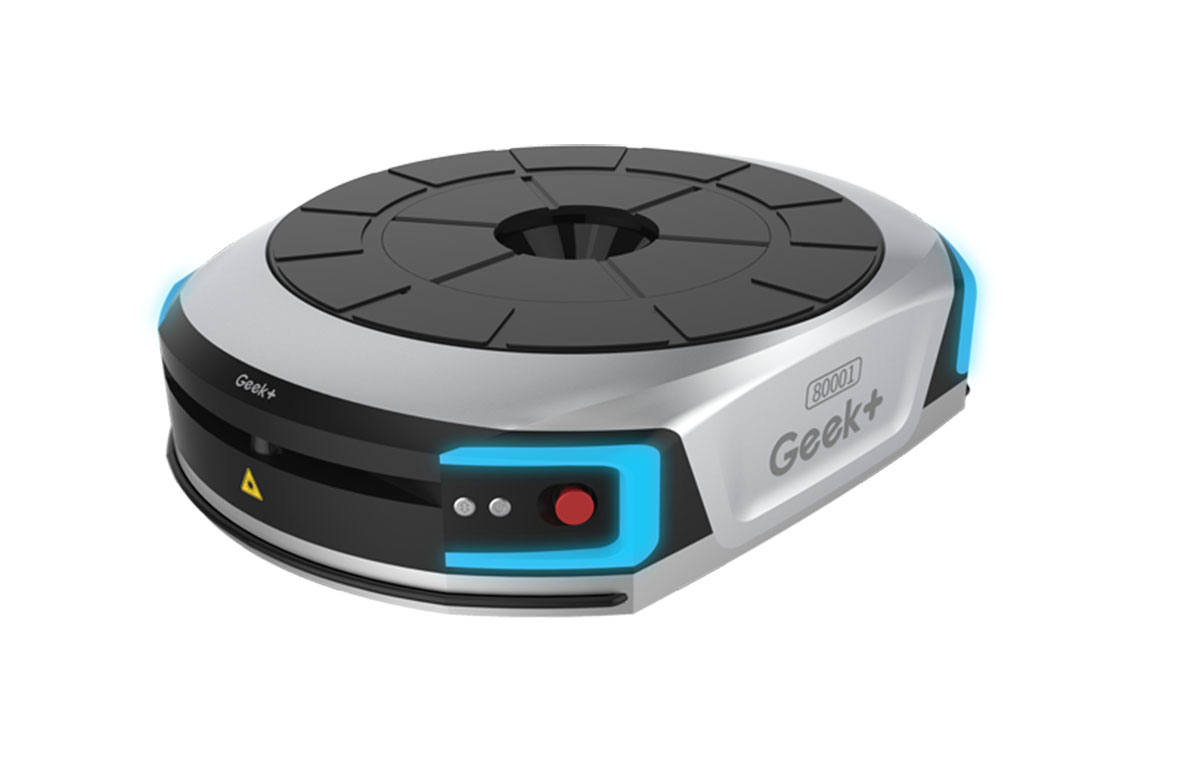 According to myFC’s market analysis, within three years the addressable market for myFC, consisting of power modules for AMRs, AGVs and warehouse trucks, will reach 100 million USD.
In 2028, the market for hydrogen fuel cell power modules for intralogistics, trucks and robots will reach a total value of 1.5 billion USD where specifically small and low power warehouse trucks will have a value of 400 million USD.
– Our micro fuel cell technology creates a unique market position for industrial trucks and robots that requires relatively low power levels where we intend to target and address a major part of the market. With the previous announced agreement with a leading OEM, we enter an attractive market where we have a strong competitive advantage compared to the conventional stacked fuel cell solutions, says Michael Glantz.
In the announced collaboration, myFC's micro fuel cells will complement the battery operation of the automatic storage robots that handle components in one of the manufacturer's storage environments. With this, competitiveness will be built via more up-time compared to today's solutions.
According to Michael Glantz, entering the logistics sector is a scenario where the company's technology can make a big difference in a way that has the potential to make a global impression.
– What makes our technology particularly suitable for storage robots is that the micro fuel cells, unlike the stacked fuel cells that are common on the market, can be shaped with great freedom. They are also easy to fit into tight spaces, he says.
According to estimates, the number of warehouses in the world will approach 160,000 this year. The site mordorintelligence.com reports that the warehouses have an average area of ​​18,000 square meters, which has tripled since the turn of the millennium. It provides a total area of ​​nearly three billion square meters, and an estimated figure of nearly 30 million warehouse workers worldwide.
What drives the development is partly a changed consumption patterns and partly changed supply chains in a global context. 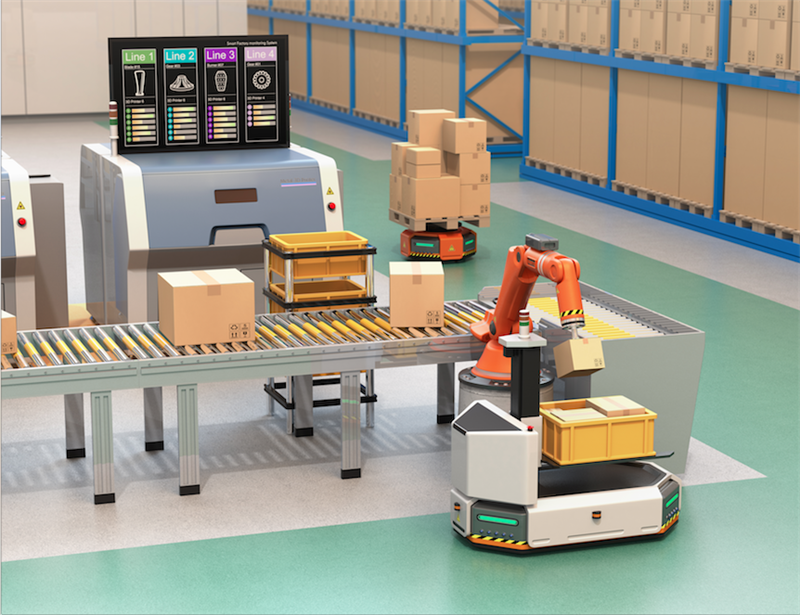 Robots in collabotation. A palletizing robot lifts goods to an automatic storage robot that transports the goods further. In the background a goods to person-robot is transporting goods, for example between machines and humans.

Warehouse work is a type of service that is increasingly being taken over by robots, like much other manual work. According to an estimate from Bank of America, 45 percent of all manufacturing work will be handled by robots by 2025.
– If you look specifically at warehouse logistics, there are several driving forces behind the strong automation trend. The main thing is that the development of industry 4.0 has made the robots more and more intelligent and useful in complex environments, but also demands for streamlining of flows both due to costs and requirements for delivery times, says Michael Glantz, CEO of myFC.
Another driving force behind the change is that warehouses are among the most affected industries when it comes to work-related accidents and illnesses – according to the U.S. Bureau of Labor Statistics, one in 20 warehouse workers is affected. Staffing is also one of the industry's biggest expenses, and a large proportion of companies mention the difficulty of finding employees as one of their most pressing issues. Even though automation reduces the proportion of people under management, the industry is at the same time in an expansive growth phase, boosted by the rapidly expanding e-commerce.

There are thus several driving forces behind the increasing level of automation in the logistics industry.
In a modern industrial warehouse for a manufacturer of highly processed products, such as computers or vehicles, components from a variety of subcontractors arrive and are then handled by robots of several different types.
Pick-and-place robots move the parts and place them in the right places, for example in the right warehouse pallets. Intelligent palletizing robots can distinguish a variety of goods that come on a conveyor belt, sort them, and place them in the right piles. Typical AGVs (Automated Guided Vehicles) are used to transport goods between different places, people, and machines in the warehouse. The manual human work is managed in several contexts with the help of so-called collaborative robots that can move in harmony with humans, where man and robot share the tasks and coexist on the same work surface. 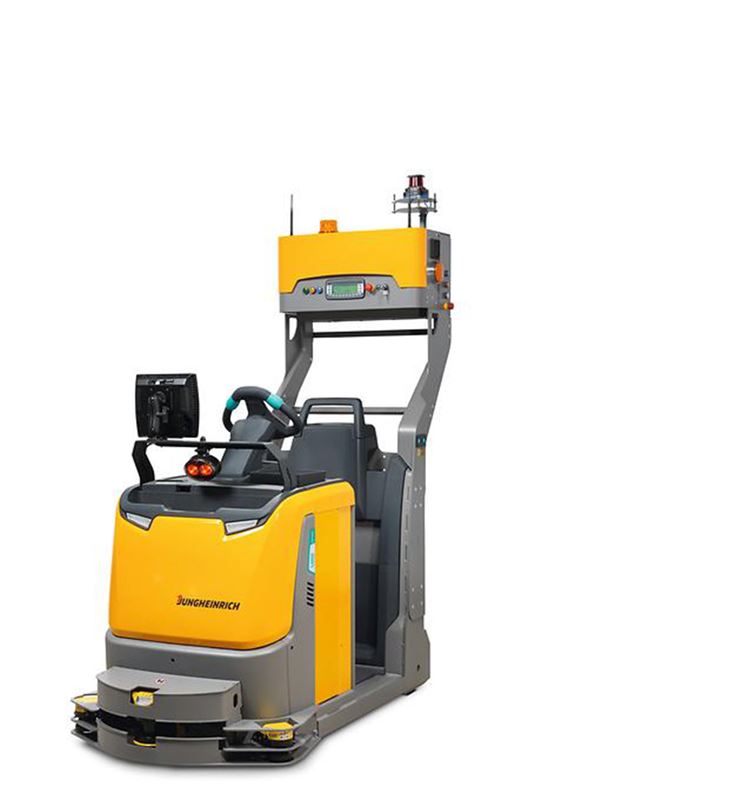 Finds the way. An example of an AGV. EZS 350 a is an automated tow truck, manufactured by German Jungheinrich. The truck uses a laser system to navigate.

In modern warehouse environments, work many times goes on around the clock without stopping, which makes robots – which neither sleep nor eat – superior to us humans. In total, the number of warehouse robots is estimated at around 3 million, and most of them are in Asia. The number increases by about 300,000 per year.

Micro fuel cells in combination with accumulators will handle several of the dilemmas that storage robots powered by batteries alone suffer from, where the time for charging means that the robots inevitably stand still for about ten percent of the maximum working time. This means that investments are needed in more robots and charging infrastructure, that demands larger areas to make room for them – an important issue at a time when warehousing services have become increasingly in demand, which has also driven up the price per square meter for warehousing space. 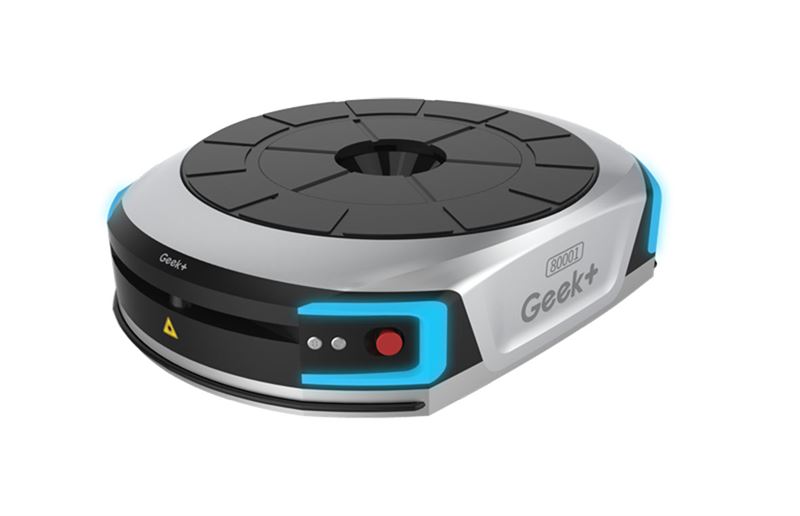 From China. The Chinese company Geek + has developed the warehouse robot P 500 - an example of a goods to person robot that delivers in warehouse environments.

Since a hydrogen tank can be filled in just a few minutes, fuel cells in combination with lithium-ion batteries provide an up-time of up to  99.5 percent, which allows companies to reduce their robot fleet with up to 25% which ultimately decreases the total cost of ownership with up to 20% due to reduced initial investment. Furthermore, the solution gives several environmental benefits. Fuel cells powered by sustainably produced hydrogen have, in principle, no climate footprint at all. The combination also means that the lithium-ion batteries get a significantly longer life, which reduces the need for unusual metals, and also reduces the amount of hazardous waste that needs to be disposed of when the batteries are used up.
– There is a clear trend in intralogistics that leads to smaller and lighter loads which means low average power consumption where our micro fuel cell technology is a better fit that conventional stacked fuel cell solutions. We see great opportunities for the logistics industry to increase efficiency, reduce overheads, increase profitability, and also reduce its environmental impact with the help of our sustainable technology says Michael Glantz.